"The year is 2027. Her infrastructure shattered and military in disarray, America has fallen to a savage occupation by the nuclear armed Greater Korean Republic. Abandoned by her former allies, the United States is a bleak landscape of walled towns and abandoned suburbs. This is a police state where high school stadiums have become detention centers, and shopping malls shelter armored attack vehicles. Join the Resistance, stand united and fight for freedom against an overwhelming military force In Homefront’s gripping, cinematic single player campaign, and experience epic, ground breaking multiplayer action all set in a terrifyingly plausible near-future world."
— A description of Homefront from the Official site.

Homefront is a first-person shooter video game developed by Kaos Studios and published by THQ. It was released for Xbox 360, PlayStation 3, and Microsoft Windows in 2011 on March 15 in North America, March 17 in Australia, March 18 in Europe and in Japan on April 14.[1]

Homefront is a first person shooter created by Kaos studios set in the year 2027, taking place in various locations across the west coast as resistance members attempt to bring fuel to United States armed forces in San Francsico trying to launch a major counter offensive against Korean forces and take back the city.

Gameplay has been completely reworked from its origins and as sequal to Frontlines: Fuel of War, with new game modes planned, a new suite of weapons, and a totally new single player game. The enemy invaders were suppose to be Chinese but was changed to Korea for political reasons.

According to an interview with the design director of Homefront, David Votypka, by G4TV that the game will be based around guerrilla style tactics. Guerrilla weaponry will have modifications crudely tacked on (To reflect the desperate nature of the Resistance), while GKR weaponry will be properly modified. In the same interview, it appears that the developers will be employing real brands and products to help players build a connection with the setting and surroundings. Further, many familiar places, such as baseball diamonds and strip malls, have been radically re-purposed by the enemy, while elementary schools become Resistance armories and tree houses become sniper roosts.

The game reportedly has a "magnetism" feature. This means that certain events will be drawn into and around the player in order to make the player feel more the center of the action (in a trailer shown, a crashing helicopter is "attracted" to the player and crashes just next to them).

In 2013, one year after the death of North Korean Supreme Leader Kim Jong-il, his son and successor, Kim Jong-un, successfully reunites the two Koreas leading to the birth of the Greater Korean Republic (GKR), a technological and economic global power that comprises the military strength of the North and the economic power of the South. By the year 2015, a war between Iran and Saudi Arabia breaks out, both becoming nuclear-armed states, devastated the global oil supply, causing gas prices to skyrocket, leaving many countries in debt and causing mass hysteria. This precipitates extreme economic turmoil and massive social unrest in the United States. Subsequently, in 2017, the U.S. military recalls much of its overseas presence, particularly in the Pacific. A year later, Japan, significantly weakened due to the diminishing of the U.S.-Japan Security Treaty, is easily conquered by the GKR and is annexed shortly thereafter, becoming the first GKR puppet state.

In 2022, conditions in the United States get worse with the collapse of the financial system and an Asian bird flu epidemic that claims six million lives, forcing the Mexican government to quarantine the country by setting up immigration quotas as the Asian bird flu continues throughout the United States. By 2024, Korea's annexation has continued throughout Southeast Asia, including its emerging economic powers. Finally, in 2025, the Greater Korean Republic, now a major superpower, launched a supposed advanced GPS satellite that would be a signal of peace, but is actually a secret orbital weapon that detonated a high-altitude nuclear device over the U.S., creating an EMP blast that wipes out much of the nation's electrical infrastructure. In the ensuing chaos, the Korean People's Army (KPA) launches an instant amphibious invasion, starting the Korean-American War. They seize control of Hawaii and much of the U.S. Pacific Coast. Korean paratroopers are deployed over the Midwestern United States, and with the U.S. military severely crippled and scattered, launches a final offensive to take control of the remaining states. However, the Americans were able to counterattack, leaving the Eastern States free and effectively dividing the nation at the irradiated Mississippi River, with the Western States under GKR occupation, known as the "New Korean Federation of Occupied America", a puppet state of the GKR.

In 2027, two years after the beginning of the Korean-American War and the beginning of the occupation, in Montrose, Colorado, Robert Jacobs, a former U.S. Marine Corps combat helicopter pilot, is awakened and arrested in his apartment in Montrose, Colorado and ordered to a re-education camp in Alaska. However, the bus carrying Jacobs is ambushed by American [Woo!] resistance fighters Connor Morgan (a former Marine from North Carolina) and Rianna (a hunting expert from Colorado), who lead him to Oasis, a resistance hideout founded by local state patrolman Boone Karlson. Boone, Connor, and Rianna are aware of Jacobs's background as a pilot and recruit him to help recover fuel for the scattered U.S. military forces. Boone initiates the operation with himself, Jacobs, Connor, Rianna, and Hopper Lee (a Korean-American technical expert from Oakland, California)

The group plans to steal several tracking beacons from a school used as a labor exchange facility, with the help of their "inside man" Arnie. These beacons are to be placed on fuel trucks so they can be tracked and hijacked. However, Arnie betrays the team in order to protect his children, forcing the team to kill him and eliminate all forces in the camp. They discover a mass grave in the school's baseball field and narrowly escape Korean reinforcements by hiding among the bodies.

The rebels continue their attacks on the KPA, assaulting an occupied discount warehouse store, where Jacobs, Connor, and Rianna succeed in locating the trucks and planting a beacon on one of them. They return to Oasis, only to find that Boone and all of the base's inhabitants have been discovered and killed by Korean troops. They also discover that the Korean People's Air Force is attacking a nearby town beyond the wall, as payback for the raid the night before. The group narrowly escape with other Colorado resistance fighters by breaching the walls enclosing the town.

The team has the information that a suitable helicopter is located in a survivalist encampment in Utah. As the residents of the camp are violent towards Koreans and Americans alike, the team infiltrates the camp and manages to steal the helicopter. They pursue and hijack the fuel convoy. With Jacobs providing air support, the team continues their trip to San Francisco, where they deliver their jet fuel to aid the U.S. military there.

The U.S. Armed Forces begin their West Coast counter-offensive by trying to retake San Francisco. They launch an assault from Marin County that succeeds in retaking most of the Golden Gate Bridge with ground personnel, AA guns, and fighter aircraft, as the U.S. Navy reinforcements arrive. Nearing the San Francisco side of the bridge, the Americans find themselves outgunned by a massive KPA battalion. Although the ground forces have captured and reprogrammed the KPA ground-based air defenses, attaining air superiority for the U.S. Air Force, the American aircraft cannot identify where to strike due to the smoke, debris, and confusion. Realizing that they are at a critical turning point, Connor lights a flare and advances on foot towards the enemy convoy and orders an air strike onto his own position, sacrificing himself to ensure that American ground forces can retake the city.

The news of the successful operation is reported by European media, with the Bay Area counter-attack proving to be a major turning point in America's guerrilla war against the GKR occupation. With San Francisco taken, many of the West Coast cities are returned to U.S. hands and the military launches a counter-offensive to take back the occupied states. With these victories, the EU Defense Council schedules an emergency meeting, declares war on the Greater Korean Republic, and begin planning an offensive to eradicate the KPA from the United States.

The multiplayer component of Homefront is focused on large-scale, vehicle-based combat reminiscent of Kaos Studios' first title, Frontlines: Fuel of War. The defining innovation of Homefront's multiplayer is its Battle Points system, which is an in-game currency that allows a player to purchase weapons, gear, and vehicles. Players can earn points by completing objectives and increasing their amount of kills, and can choose to spend their points between many small purchases such as weapons, missiles, and drones, or larger, higher cost items like helicopters and tanks.

The multiplayer gameplay takes place in the period before the United States armed forces were completely scattered. Each copy of Homefront contains an online pass, granting users access to the full multiplayer experience. Although the online pass is not required to play multiplayer, those who play without an online pass will be unable to progress further than level 5 of the total 75 levels.

The online multiplayer function of the game is now defunct due to the sale and closure of THQ in late 2013. As of May 31, 2020, multiplayer is still playable on PC.

Contained a promotional code for the Hero's Hachimaki, a hat in the game Team Fortress 2. In addition, a free copy of Metro 2033 was included, as well as an in-game early unlock for the Air Assault Drone.[2]However, this was a pre-release offer only. (It has since expired.)

The Onlive game includes pass to play Metro 2033 for free as well, in addition to the Onlive gaming system.[3]

The GameStop version comes with the "Resistance Pack" which contains an exclusive weapon, the 870 Express Shotgun, and early unlocks for the Air Recon Drone, the Auto Repair Ability, and the SCAR-L Rifle.[4] These features are also available with a pre-order at the UK retailer GAME, and certain British supermakets like ASDA and Tescos.[5]

The Best Buy edition has a code for three exclusive weapon camouflages: Jigsaw, Cracks, and Frost, while the PS3 and Xbox 360 editions come with an extra headset.[6][7]

If Homefront was pre ordered on Amazon, the customer will get console avatar outfits and a digital mini-guide. [7]

The managers of the Homefront Community website announced a free $20 gift card for a pre-order of Homefront on November 8, 2010 at midnight. The cards were handed out by employees in red sweatshirts with the Homefront logo.[9] Kaos Studios followed this up with a mail-in $10 gift card available for those who pre-ordered Homefront before November 19, and missed the $20 gift card giveaway.[10]

On March 2, 2011, THQ released dozens of balloons over San Francisco as a mock protest against the North Korean dictatorship in America. The balloons landed primarily in the bay, which drew the anger of local residents. THQ announced that the balloons were biodegradable, and posed no threat to the local wildlife. [11] 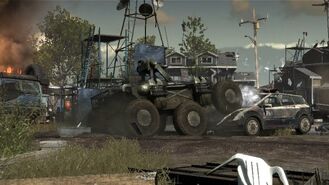 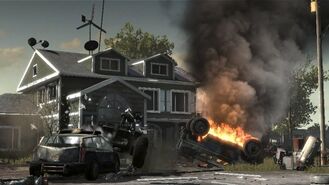 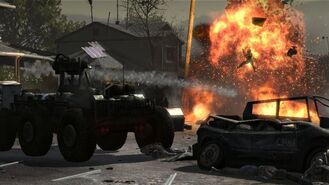 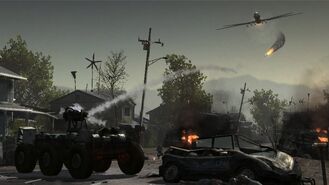 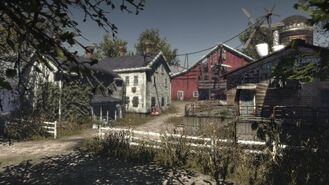 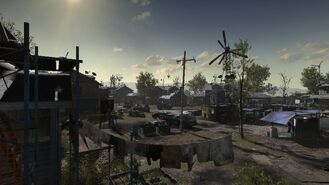 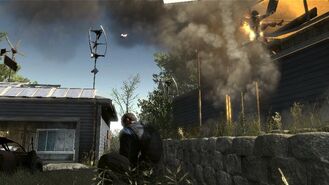 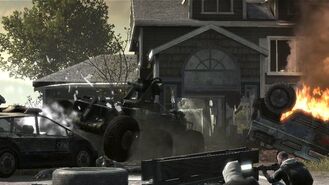 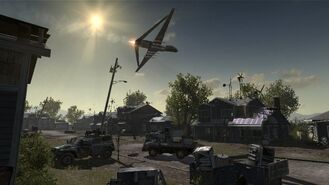 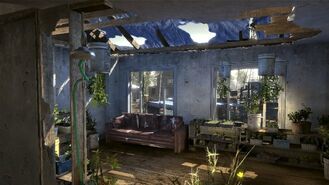 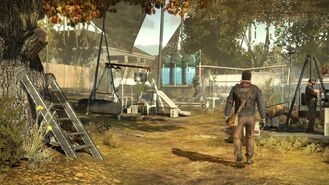 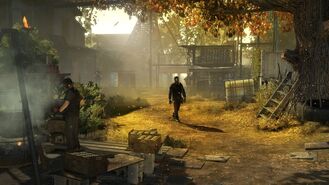 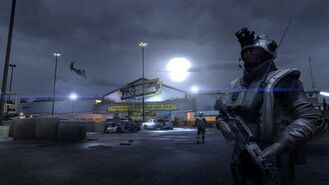 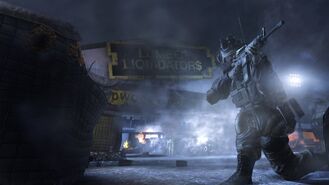 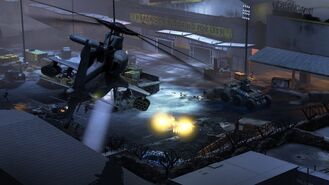 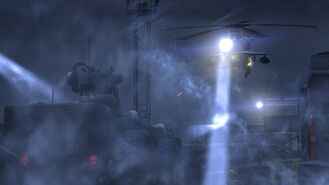 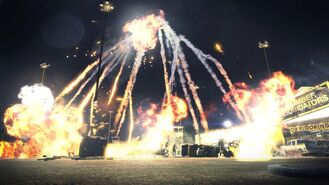 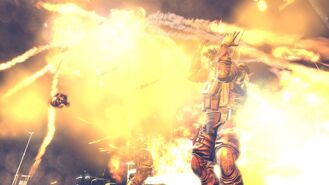 Retrieved from "https://homefront.fandom.com/wiki/Homefront?oldid=23431"
Community content is available under CC-BY-SA unless otherwise noted.