"Out-Fucking-Standing!"
— After Robert Jacobs destroys the LAV-25 blocking their escape in Why We Fight.

Connor Morgan was a former U.S. Marine, and a key combat figure for the Resistance in Montrose. He is described as being on the wild side and sometimes "cocky," jeopardizing his fellow resistance fighters on several occasions. In 2027, Connor sacrificed himself to save his allies.

Connor was born in Charlotte, North Carolina in 1989. At some point he enlisted in the United States Marine Corps and fought in the Oil Wars. Connor was based in a Resistance cell in Montrose, Colorado and due to his attitude often came to odds with Resistance leader Boone Karlson and Rianna.

Connor and Rianna led a rescue mission in saving Robert Jacobs from being transferred to a re-education camp. With the KPA after them, Connor told Jacobs that he had no choice but run with the Resistance. He and the Resistance regrouped with Hopper and Boone during an altercation with the local Montrose citizens, who were recalcitrant in being involved with the Resistance in fear of attracting the KPA. Connor was very disgusted with the locals' disrespectful reactions and their unwillingness to show any resistance against the Koreans.

After escaping the KPA and bringing Jacobs to the Oasis, Connor and the Resistance plan to steal several tracking beacons from a school used as a labor exchange facility, with the help of their "inside man" Arnie, to be be placed on fuel trucks so they can be tracked and hijacked for the American counter-offensive in San Francisco. However, Arnie betrays them, forcing Connor and the others to kill him and eliminate all forces in the camp. During the firefight, they came upon a mass grave in which the sight of the atrocity infuriated Connor into attacking the Koreans overseeing the burial.

Continuing their attack on the KPA, the Resistance assault an occupied discount warehouse store where the fuel trucks are located. Despite heavy losses, the Resistance were able to plant the tracking devices on the trucks. The Resistance returned to the Oasis, but only to find that Boone and all of the inhabitants have been killed by the KPA. Regardless, Connor and the surviving Resistance members continued their objective after fighting their way out of Montrose.

After capturing the fuel trucks, Connor participated in the attack on San Francisco and helping leading American forces across the Golden Gate Bridge. Ultimately, Connor was killed in which he sacrificed himself by using a flare to signal an airstrike against a KPA convoy on his location.

"What the fuck I don't believe this. Thrown into a pit like garbage how many people are in this ditch you sons of bitches scumbag mother fuckers YOU MOTHER FUCKERS! You think you can just throw us in a goddamn ditch?! You invade our country! Kill our families! I'LL BURN YOU, you sons of bitches! We're not fucking cattle for you to slaughter! Come get some! I'm gonna make you fuckers pay for this!"
— Conner becomes enrage upon discovering mass graves

Connor Morgan was a take-no-prisoners type of man, known for his physical strength and overall combat skill. He expected everyone in America to fight, not considering that some people are not fighters and just want to live their lives. He had a high opinion of right and wrong. He also had anger problems. Upon discovering a mass grave, his rage boiled over and he proceeded to attack the Koreans digging the grave, screaming, threatening and cursing them. 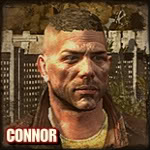 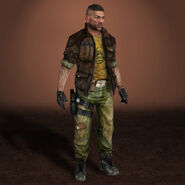 Connor's Model created possibly in 2011, by an Unknown Artist...

Connor in the last moment of his life waving the flare in order for the fighters to drop the bomb directly at KPA's armored vehicles at his position. His action costs him his life.

Connor's wanted poster.
Add a photo to this gallery

Retrieved from "https://homefront.fandom.com/wiki/Connor_Morgan?oldid=23258"
Community content is available under CC-BY-SA unless otherwise noted.