The 870 Express Shotgun is a pump-action 12-gauge shotgun featured in Homefront.[1] Its is available DLC for the Xbox and is bundled with the "Resistance Pack," which also includes early unlocks for the Air Recon Drone, the Auto Repair Ability and the SCAR-L.

Pump-action shotgun widely used by civilians and law enforcement. Devastating at close range. Top-mounted tactical rail accepts a variety of optics. It is advised not to engage multiple enemies with it due to its pump-action.

The 870 Express Shotgun can be found in the mission Fire Sale once inside the TigerDirect store, when the player sees it on the right. It also can be found towards the end of The Wall in the White Castle, and lastly found in the church in Heartland.

It can be found in Multiplayer by pre-ordering Homefront as part of the Resistance Multiplayer Pack or picking up someone else's shotgun. It does most damage in close range, and as such is not often found with any attachments other than the reflex or Red dot sight. It comes with all attachments with it as soon as it's unlocked. It can be equipped with a ACOG scope, however due to its low range it is rarely seen. It was later put up as a DLC for 80 Microsoft points ($0.99). It is powerful at close to medium range. 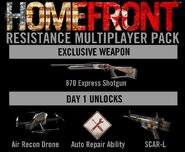 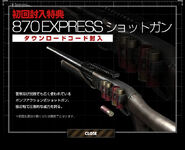 From the Japanese website.
Add a photo to this gallery

Retrieved from "https://homefront.fandom.com/wiki/870_Express_shotgun?oldid=22295"
Community content is available under CC-BY-SA unless otherwise noted.